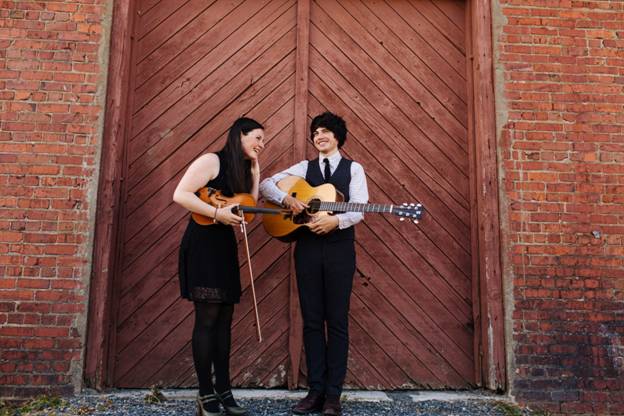 West Coasters Qristina & Quinn Bachand have proven to be quinn-tessential to Canada’s contribution to the world stage, garnering a mantle-packing collection of awards and recognition that thrust them to the top of the international Celtic music world. With Qristina’s shimmering vocals and inspirational fiddling and teen Quinn’s old–soul mastery of all things stringed, this brother and sister act clearly hits the mark, earning accolades and international touring opportunities with the likes of Ashley MacIsaac and Natalie MacMaster . The duo won Top Traditional Group and Top Duo at the Irish Music Awards, a combined 8 nominations at the Canadian Folk Music Awards, and finalist position for Quinn as “Emerging Artist” at Canada’s Walk Of Fame. Their new CD Little Hinges also garnered a nomination at the Western Canadian Music Awards for Roots Duo/Group Recording of the Year!

Little Hinges opens the door even further, illuminating the two sides of their passionate grasp of Celtic music – the traditional and the avant garde– elevating them to new heights.

Indeed, with their signature embrace of experimentation and improvisation, Qristina & Quinn have developed their own fresh voice, fusing various musical styles such as Old-Time, stomp and clap Celtic Roots, Folk and Jazz, while adding a dash of noir and a dollop of rootsy goodness with results that are arresting, provocative, and thoroughly intoxicating.

Qristina & Quinn have served notice that their innovative approach to traditional Celtic music embodies countless moods and as many colours. As such, Little Hinges swings the door wide open with its boundless energy and quest for adventure.

The release of Little Hinges follows their two critically acclaimed albums, “Relative Minors” (2008) and “Family” (2011), and also heralds the debut of Quinn’s singing voice which are added hand-in-glove to Qristina’s bewitching vocals.

Undoubtedly two of the most outstanding young musicians to emerge from Canada, Qristina and Quinn Bachand have a musical bond that only siblings can share, with a musical connection reminiscent of other Canadian family groups such as Leahy, The Barra MacNeils and The Rankins.

Qristina and Quinn have performed at major Folk and Celtic festivals across Canada, the United States and Europe, and are touring Ontario this summer before they both head back to school in the Fall.
Youtube link: “What You Do With What You’ve Got” (official video)
https://www.youtube.com/watch?v=AXW6VIq4LBs

Celtic Canada readers can catch them at: