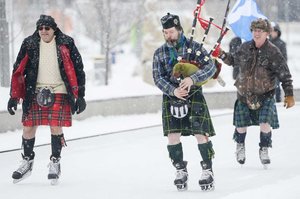 Kilted skaters will take to the ice this winter to honour Scottish heritage, and celebrate Canada’s 150th birthday as well as the 202nd birthday of Canada’s first Prime Minister, Sir John A. Macdonald. The third annual Sir John A’s Great Canadian Kilt Skate will be held on:

Sir John A’s Great Canadian Kilt Skate is indelibly Scottish and undeniably Canadian,” says Kevin MacLeod, Chair of The Scottish Society of Ottawa (SSO) which coordinates the national event. “It speaks to the Scottish contribution to Canada’s multicultural heritage, and this winter, for Canada’s 150th birthday, it’s bigger than ever.”

Sir John A’s Great Canadian Kilt Skate had its origin as an annual birthday party in an Ottawa home near the Rideau Canal Skateway.  In 2015, the SSO approached the organizer, Don Cummer, to turn his gathering into a city-wide event to celebrate the 200th birthday of the architect of Confederation and Canada’s first Prime Minister, Sir John A. Macdonald. Within weeks it morphed into an event held in five of Canada’s ten provinces. This year, Sir John A’s Great Canadian Kilt Skate will be held in six cities, with Toronto as the newest addition to the partnership.

More than five million Canadians trace their ancestry to Scotland,” says Chris Maskell, Scottish Government representative. “We’re incredibly proud of that Scottish heritage, and we want to celebrate the enormous contribution that Scots and those of Scottish descent have made here in Canada – perhaps none more so than Sir John A. Macdonald.” The Scottish Government is keen to help the Scottish Canadian community maintain their connections to Scotland.  “This year marks the 150th birthday of Canada, but it is also Scotland’s Year of History, Heritage and Archaeology,” says Maskell. “There’s never been a better time to come and visit Scotland.”

“We’re delighted to partner with the Scottish Government,” says Don Cummer, organizer of Sir John A’s Great Canadian Kilt Skate in Ottawa. Skaters in that city will gather on the Rideau Canal Skateway at the Dow’s Lake Pavilion from noon until 2 p.m. on Saturday, January 28. Last year, because of the short skating season on the canal, the event was moved to Aberdeen Pavilion. “This year, we’re back on the world’s largest skating rink,” says Cummer, “and we’re expecting a great turnout. It doesn’t seem to matter how cold it gets, people come out to celebrate Sir John A. with bare knees and ice.”

“No matter where you are, this event is open to everyone.  It’s a chance to nurture your inner Scot,” says SSO’s MacLeod. “You don’t have to be Scottish. You don’t even have to wear a kilt. Just come to the party with a spirit of Scottish fun and fortitude, and wear Canada’s favourite colour – tartan!”

For more information on Kilt Skate: 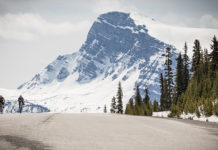