Halloween – a time for thrills, chills and scaring ourselves silly. But did you know that everyone’s favourite fright-filled holiday began in Ireland? Trace Halloween right back to its origins and you’ll find yourself in the mists of pagan Ireland over 2,000 years ago – a time when the ancient festival of Samhain was celebrated in the heart of Ireland’s Ancient East to mark the beginning of winter.
It’s said that at Halloween the boundary between our world and the Otherworld is at its thinnest, allowing spirits and demons to easily pass between the two. So come with us on a strange and spooky journey as we experience Halloween in Ireland.

1 Leap Castle
A visit to Leap Castle in County Offaly is not for the fainthearted. Built in the early 1500s by the brutal O’Carroll clan on what was said to be an ancient druidic site, its gruesome history involves massacres, murders and horrific torture. Enter the Bloody Chapel and you might just feel the presence of a long-dead priest, slaughtered on the alter by his own brother. And if a room suddenly turns icy cold, look out for the Red Lady who wanders the castle holding the dagger she used to take her own life.

2 Loftus Hall
One stormy night in County Wexford, a stranger came to Loftus Hall seeking shelter. Charles Tottenham invited him in, and over time, his daughter Anne became captivated by the mysterious guest. During a game of cards one night, Anne bent down to retrieve a fallen card and was shocked to see her beloved had a cloven hoof. Petrified, she revealed his secret, and, engulfed with rage, he flew through the ceiling, leaving behind a hole that could never be repaired. Driven to madness and locked away by her family, Anne died in 1775. Wander through the house and you may catch a glimpse of her tortured soul waiting for the devil incarnate to return…

3 Castle Roche
On a high hill in County Louth you can see Castle Roche, once the home of Lady Rohesia de Verdun. She had promised her hand in marriage to the man who could build her the stronghold of her dreams. Rohesia made her choice and got her castle. On the night of her wedding, she invited her new husband to join her at the great window of their bridal chamber. He felt her hand on his shoulder and as he turned to kiss her, she pushed him out of the window to his death. It’s said that you can sometimes spot his ghost walking among the ruins lamenting what might have been.
4 Duckett’s Grove
The fanciful towers and turrets of Duckett’s Grove dominate the County Carlow landscape but the story of the Duckett family who lived in this gothic mansion until 1916 is no fairytale. It was said that William Duckett’s lover put a curse on the family in the terrifying form of a Banshee, a wailing female entity that foretold the death of family members. Tragedy struck this young woman soon after when she fell from her horse and died. Listen closely and you may hear the cries of forlorn souls whistling through these weathered walls… 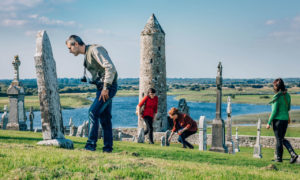 5 Kilkenny Castle
Kilkenny city is a medieval hotbed of spooky tales. Take Kilkenny Castle, owned by the Butler family for hundreds of years. Locals tell stories of a ghostly woman who roams the corridors and wanders lost and lonely through the castle gardens. She is known as the ‘White Lady’ but many think this is the spirit of Lady Margaret Butler, who was born in the castle in the mid-15th century and was the paternal grandmother of Anne Boleyn, second wife of King Henry VIII of England.

6 Castle Durrow
Now an elegant four-star hotel, Castle Durrow in County Laois dates back to the 18th century and was home to barons and viscounts for hundreds of years. In the early years of the 19th century, the local community was terrorised by a ruthless gang of thieves, led by the notorious highwayman, Captain Jeremiah Grant. This band of miscreants was eventually captured and hanged, but not before they buried their stolen treasure deep in the old forests around Durrow. It’s said that the spirits of these wicked men still protect their ill-gotten gains so beware… 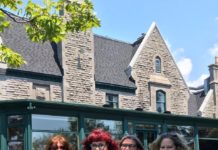 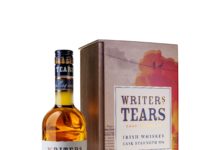