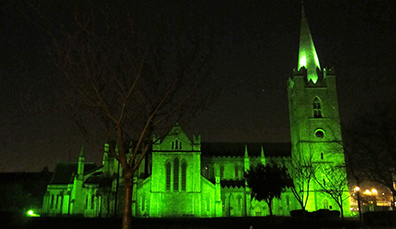 Tourism Ireland’s Global Greening 2018 sees the return of the Sydney Opera House and new additions like the Seattle Space Needle, San Mamés stadium in Bilbao and Chimo the Polar Bear in Canada
300+ stadiums, statues, museums and towers set to go green to celebrate our national day

The iconic Space Needle in Seattle, Chimo the Polar Bear statue in Ontario, the fountains in London’s Trafalgar Square and the San Mamés stadium in Bilbao – the home of Athletic Club Bilbao – will join Tourism Ireland’s Global Greening initiative for the first time in 2018. And, making a welcome return this year, for the first time since 2014, is the Sydney Opera House.

Tourism Ireland today announced details of some of the famous attractions and sites around the world which will go green to mark St Patrick’s Day this year, continuing the organisation’s first-half promotional drive to grow overseas tourism in 2018. The annual initiative, which sees a host of major landmarks around the world turn green for St Patrick’s Day, has grown from strength to strength, with lots of exciting new landmarks signing up to take part this year.

Other new sites and buildings for 2018 include: the Wawa Goose monument in Ontario and the Cochrane Polar Bear Habitat (also in Ontario), the National Football Museum in Manchester, the Palais de l’Europe (the seat of the Council of Europe) in Strasbourg, Beaugrenelle shopping centre in Paris, the beautiful Kunsthistorisches Museum and the Naturhistorisches Museum in Vienna, the Königsbau building in Stuttgart, Uilenburgersjoel Amsterdam, the Yokohama Marine Tower in Japan, Pen Monument in Hanoi, the Sammy Ofer Stadium in Haifa, as well as Vabaduse Väljak (Freedom Square) in Tallinn.

These new sites will join some ‘old favourites’ which have gone green in previous years – including the Colosseum in Rome, the Leaning Tower of Pisa, the Sacré-Cœur Basilica and the Sleeping Beauty castle at Disneyland® in Paris, the Sky Tower in Auckland, Niagara Falls and the London Eye. And, Chicago will be going all out to celebrate St Patrick and Ireland once again this year, with numerous buildings and sites across the city set to light up green – including Navy Pier, the John Hancock Center, the Wrigley Building, the Civic Opera House and Soldier Field (home to the famous Chicago Bears team).

Tourism Ireland’s unique global campaign – now in its ninth year – continues the organisation’s first-half promotional drive to build on the success of 2017 and grow overseas tourism to the island of Ireland again in 2018.

Minister of State for Tourism and Sport, Brendan Griffin TD, said: “I am delighted to launch Tourism Ireland’s 2018 Global Greening initiative which has now grown to become a significant worldwide reminder of both St Patrick’s Day itself and also of Ireland and its appeal as a visitor destination. The record growth in the number of tourists visiting Ireland in recent years bears testament to Tourism Ireland’s successful strategy of market diversification, implemented since 2014, and the Global Greening initiative is a very important element of this strategy. The St Patrick’s Day period provides a unique opportunity to promote Ireland on the international stage and to renew the strong bonds between Ireland, the global Irish abroad and our partners around the world. The Government’s “Promote Ireland” programme of international events over the St Patrick’s Day period will see the Taoiseach, Tánaiste, Ministers and the Chief Whip take part in programmes to promote Ireland and Irish interests in almost 40 countries across the globe. The Ceann Comhairle and Cathaoirleach of the Seanad will also participate. I commend all the staff in our Embassies and Missions overseas, in the Department of Foreign Affairs and Trade and in Tourism Ireland for the outstanding work they have done in organising this campaign across the globe, which will no doubt further enhance Ireland’s profile abroad as a holiday destination of choice.”

Niall Gibbons, CEO of Tourism Ireland, said: “This is the ninth year of Tourism Ireland’s Global Greening initiative and each year I am delighted to see even more well-known attractions and landmark sites wishing to get involved and join our St Patrick’s celebrations. The success of our Global Greening initiative is due in no small part to the great work that has been carried out across the world by Irish people and the Diaspora. I would particularly like to thank the Department of Foreign Affairs and Trade for the great support we receive from the Irish embassy network. The eagerness of cities and countries everywhere to take part underlines the strength of the deep connection that people all over the world feel to Ireland. More than 70 million people around the world claim links to the island of Ireland and St Patrick’s Day is a truly unique opportunity to reconnect them with their heritage.

“People across the world instantly identify St Patrick’s Day with the island of Ireland and that heightened profile allows us to put the Ireland holiday experience in the spotlight – from Sydney to Seattle and from Rome to Rio de Janeiro. Our St Patrick’s programme this year will span Great Britain, Mainland Europe, North America, Australia, as well as emerging tourism markets such as China and India. There will be saturation coverage of the island of Ireland across the airwaves, in newspapers and digital media – and that’s an invaluable boost at this time of year for our overall tourism marketing drive for 2018.”

International journalists – representing top media outlets from around the globe – will visit Ireland, taking in the Dublin St Patrick’s Day parade during their time here. And Tourism Ireland will also exploit the profile of St Patrick’s Day with international media – sending images, video footage and news about Ireland to news desks around the world, as well as to its database of more than 20,000 influential travel and lifestyle media contacts. 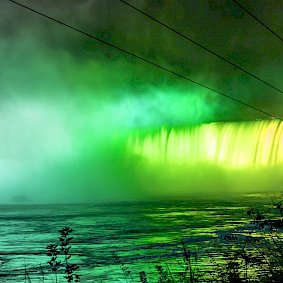 The Rhine Falls, near Zurich
Australia and New Zealand
Australia