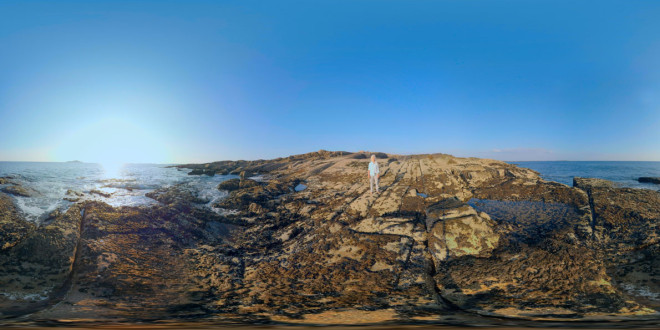 For the past four months filmmaker Paula Kehoe has been working with Galway 2020 in partnership with UNESCO City of Film/Galway Film Centre, to create a specially commissioned 3 minute film. The Film was the first thing that the 10 members of the European Capital of Culture jury panel saw at Galway’s presentation in Dublin on July 14th in the National Concert Hall. Steered by Tracy Geraghty from Galway2020 and Declan Gibbons from the Galway Film Centre, Paula created an immersive Virtual Reality (VR) film as the opening chapter of Galway’s presentation. To see the film in all its glory the ECOC jury panel wore special VR headsets that allowed them view the film through 360 degrees that achieves the full VR experience.

This was a high-risk strategy as this was effectively Ireland’s first narrative VR Film and involved the ECOC jury panel having to engage in watching the film in an entirely different way. Award winning filmmaker Paula Kehoe was engaged as Galway 2020 ‘Filmmaker in Residence’ to respond to the bid and developed, created and delivered a film that is edgy, memorable and uniquely Galway. How to shoot the film, how to edit the film and how the jury would see the film were all key questions for Paula and her team.

Ireland’s only professional 360 camera crew worked on the project: Ian Fitzgerald and Terry Madigan from Virtual Reality Ireland. The 360 camera is essentially ten cameras in one and the shots are then sewn together and further treated in post production. Eugene McCrystal of Outer Limits Post Production (formerly EMC post, Room, Queen of Ireland, You’re ugly too) worked on the grade and visual effects, Julie Flavin (Deargdhúil: Anatomy of Passion) was offline editor and James Latimer (Stutterer) was on sound.

This is a pioneering project in Ireland opening up new post production paths for VR immersive film.

Tracy Geraghty, member of the Galway 2020 Programme Team commented ‘Paula Kehoe created a beautiful immersive cinematic poem for Galway 2020. The film not only echoes the themes of language, landscape and migration embedded in our programme but demonstrates how high artistic excellence can be achieved using new technologies. Members of the ECOC jury panel described their experience of viewing the film as ‘incredible’, ‘astounding’ and ‘epic and inspirational’.

Filmmaker Paula Kehoe said “It was such a great challenge to not only respond to the Galway bid as it evolved, but to take on making a VR film. I had a choice between making a traditional 2D film, or a VR film. The latter was risky because it’s such new technology. I decided to go for it because VR technology is central to some of the brilliant projects in the bid book, and it felt like we had to put our money where our mouths are and show them what we can do. My main challenge was to make the experience of the film and what is says about Galway more powerful than the technology that delivered it. If the judges took off their headsets thinking ‘wow, isn’t VR amazing’, then I hadn’t done my job. So the idea had to lend itself to the medium in a very particular way.

The script is a mash-up of poems, borrowing lines from Mise Raftery and Song of Amergin which were adapted and complicated for Galway in the twenty first century. I was delighted that Olwen Fouéré agreed to take part as she is from Aughris Beag in Connemara and one of our locations was on Omey Island nearby, looking out to High Island which is a very special place. Róisín Seoighe from Ros a Mhíl is the voice of the young girl who at sixteen she is a very talented Galway singer and musician. The cast also includes Peadar Ó Treasaigh as the mountain man, Tristan Warner as the little boy by the river, Macnas Young Ensemble and many Galway friends and colleagues who participated in the group scenes.”

Declan Gibbons, Director of UNESCO City of Film adds “because we are a designated UNESCO City of Film our bid film needed to be special. The stakes were so high for this bid and we really had to deliver. We needed an extremely talented filmmaker with vision, passion and the willingness to take a big risk. The best decision I made all year was to propose Paula Kehoe to take on the job. She is a film artist to her very core and has created a really special film. It’s an extraordinary piece of work and we’re so proud of Paula Kehoe and what she has achieved. I don’t know any other filmmaker who could have done it”.

The film is available on YouTube and can be viewed with Google Cardboard VR headsets through VR apps on your phone. However, you can call into the Galway 2020 Hub in the Cornstore where they have the Gear VR headsets and headphones to get the full 360 degree experience.