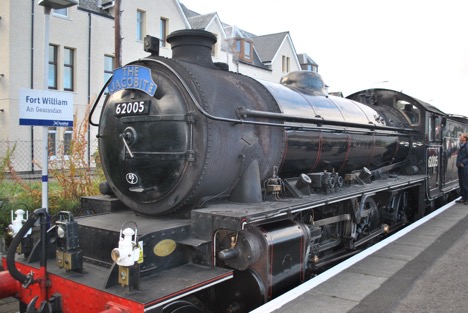 The Jacobite steam train service in the Highlands of Scotland, is provided by West Coast Railways and is arguably one of the most scenic and spectacular rail journeys in the world.

The steam train service to Mallaig was re-introduced in 1984 to encourage tourism and the service was originally known as “The West Highlander”, but was later changed to “The Lochaber”. In 1995, when West Coast Railways took over, the name was changed to “The Jacobite”, to reflect the local historical connection, (which you can read about in a later issue).

In October 2015, my brother and I arranged a wee surprise for our mother, to celebrate her 90th birthday. She was not disappointed, saying that it was one of the most memorable days of her life.

From East Kilbride near Glasgow, we took the M8 motorway and drove across the estuary to the River Clyde at the Erskine Bridge onto the A82, which took us along the western shores of beautiful Loch Lomond. It can be a demanding drive for the uninitiated, as it is not all dual carriageway, indeed it is single lane road for a significant part of the journey, but the views are rewarding and well worth the challenge. This was my chosen route, driving along familiar territory via Ardlui, Crianlarich, Tyndrum and Bridge of Orchy, across Rannoch Moor and through the majestic pass at Glencoe, before taking the bridge over to North Ballachulish (where Loch Leven meets Loch Linnhe) and on to our destination – Fort William.

The scenery on that part of the route alone, was simply quite magnificent, with stunning vistas around every corner. Driving through the infamous pass always brings thoughts of those dreadful historical events from the 17th century, which remain deeply entrenched in Scottish history to this day.

We had planned well, and stayed overnight in Fort William, at a B&B situated only a few minutes from the railway station, so it was a leisurely walk ahead of our departure the following day. (The Ben Nevis B&B is recommended. Clean, tidy, comfortable with a hearty Scottish breakfast to start the day)! There are plenty of restaurants and pubs in the town, and no shortage of places to dine, before bedding in for the night.

Walking along the platform the next morning and seeing the old steam train brought back fond memories of my childhood, when my parents took the family on holidays. The steam rising from the locomotive, the smells and the steam whistle – for a few minutes I felt that I was a child again! (It is also prudent to arrive early, to allow time for snapshots of the train before it departs). At exactly 10:15am, the guard waved his flag and blew his whistle, and we were off!

The train travels from Fort William to the coastal town of Mallaig, which is a busy fishing port and ferry terminal for the islands. There is a scheduled stop along the way at Glenfinnan, where the Glenfinnan Monument is situated at the head of Loch Shiel, and which can clearly be seen, offering wonderful photo opportunities. This monument was erected in 1815 to commemorate the raising of the royal standard by Bonnie Prince Charlie in 1745. You can also stop at Arisaig, but a special request to the guard has to be made in advance!

The weather was perfect – with unlimited visibility from our window allowing clear ocean views of the distant islands of Muck, Eigg, Rum and Canna and the southernmost tip of the Isle of Skye. Eigg is identified clearly by its’ familiar flat-top appearance.

The train arrived at 12:25pm in Mallaig and the brief stop, (1 hour 45 minutes), allows plenty of time for sight-seeing. It is a picturesque town, with a busy harbour, and it is worth a walk to the quayside to watch the daily hustle and bustle of the fishermen landing their catch and to see the arrival and departures of the ferries. There is time to enjoy a lunch, (some wonderfully fresh fish and chips here), or even a few libations at one of the local pubs. The train departed Mallaig at 2:10pm sharp, and with another round of tea, coffee and scones on offer in our compartment, we commenced our journey back to Fort William, arriving promptly at 4pm.

The Jacobite attracts people from all over the world, and on our journey, I had the pleasure of meeting folk from the USA, Canada, France, Norway, Germany, Spain, Netherlands, China and Japan.

One of the highlights of the journey is crossing the Glenfinnan Viaduct, which was opened in 1901. You may recognize it from the Harry Potter movies, as The Jacobite is also known as the Hogwarts Express! This is an ideal photo opportunity as the train winds its’ way over the viaduct and you can see the engine from your window on the outward and inward journey, as it swings around the curve.

A journey on The Jacobite is highly recommended and one that you will never forget, if you decide to make the trip. The majesty of the scenery, coupled with the trappings of a time gone by, combine to make this a journey to remember.

The Jacobite travels seasonally between Fort William and Mallaig, generally Monday to Friday from the first week in May to the last week in October, and on the weekend from mid-June to mid-September. A morning and afternoon service is available. There is a choice of regular seating or a limited number of first class compartments, (which seat six persons) in old carriages which have been restored to their former glory. Included in the price for the latter option is tea, coffee, sandwiches and biscuits. Adult day return tickets are priced at £34 for a standard ticket and £58 for a first class ticket.

Full details for The Jacobite service can be found on the website at http://westcoastrailways.co.uk