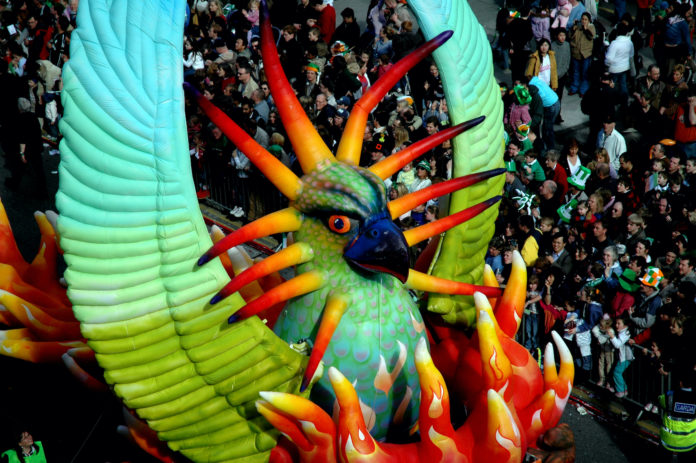 After a two-year break, live parades and in-person events are back in Ireland to celebrate the island’s national holiday.

With the people taking to the streets to celebrate St Patrick’s Day for the first time since 2019, the whole country is setting up for an array of festivities that will be bigger and better than ever before.

Including an additional one-off public holiday on 18 March, introduced to acknowledge the tough times of the pandemic, there will be parades, live music, Irish dancing, arts, culture and heritage aplenty in a long weekend stretching from St Patrick’s Day itself, on Thursday, 17 March, right through to Sunday, 20 March.

The epicentre of the merriment is the huge St Patrick’s Day Festival in Dublin (16 – 20 March), where this year’s landmark celebration will be the largest ever in scale and ambition.

Under the theme of ‘Connections’, the festival will be a moment for the nation, and the Irish tribe of 80 million across the world, to connect, reflect, celebrate and welcome.

With more pageants, more marching bands and more participants than ever before set to snake through the streets of Dublin, the iconic National St Patrick’s Day Parade will return to delight the hundreds of thousands attending on Thursday 17 March.

The festival is introducing a new Festival Quarter for 2022, which will be set up in the surrounds of the National Museum of Ireland, Collins Barracks. The spectacular heritage site will become home to a magical day-to-night urban festival featuring a 3,000-capacity outdoor main stage, comedy tent, story yurt, relaxation areas and more.

The Festival Quarter will also host the Irish Food and Craft Village, a daily indulgence of Ireland’s incredible food and beverage produce, as well as arts, crafts and a space for all to relax and connect.

Some of the country’s top musicians will perform at the Festival Quarter site, while it will also host Céilí Mór, a massive and much-loved outdoor traditional dance session, this year guided by a former Riverdancer and champion Irish step-dancer.

A unique one and half day city retreat called ‘Breathe’ is also part of the Dublin festivities. Focused on wellness and resilience for individuals, communities and the planet, it will take place in the grounds of The Law Society of Ireland on March 18 and 19.

St. Patrick’s Day parades will take place across the island of Ireland

St Patrick’s Day around Ireland
Ireland’s St Patrick’s Day will of course resonate right across the entire island. Anyone heading outside of the capital will be assured of catching entertaining parades and events, as cities, towns and villages around the country host their own celebrations.

Belfast’s St Patrick’s Day festivities are set to return with a reimagined programme that includes an outdoor concert on the evening of 16 March and a reinvented St Patrick’s parade pageant on 17 March. Offering a spectacle of modern-day creativity, fun and theatrics, it will bring music and colour to the streets.

Plans are also afoot for a mega celebration on the double bank holiday in Cork, the island’s third largest city, as its St Patrick’s Festival returns from 17 – 20 March. There will be a carnival of colour through the centre of the city, traditional music in local pubs, tours and activities in historic and cultural venues and even a visit from the Massachusetts State Troopers, assisting local Gardaí in celebrating the centenary of the Irish police force.

On Ireland’s Wild Atlantic Way, the fun and craic associated with the Limerick St Patrick’s Festival returns (17 – 20 March). With its huge traditional parade, street theatre, fire performance and aerial dance, as well as the Limerick International Band Championship, which welcomes hundreds of performers from across the world, the city will be buzzing.

Meanwhile, with a theme of ‘Together’, everything from music, poetry and dancing will be on offer at Sligo St Patrick Festival (16 – 18 March), alongside the city’s traditional parade, which will be followed by Sligo Buskers Fest. A Sligo Music Trail will also feature across 10 venues on 16 and 17 March.

In Killarney better days are on the way as the town’s St Patrick’s Festival comes back bigger for 2022. Landmark buildings and shop windows in the town will be illuminated from 9 – 22 March in fetching shades of green and there will be a public vote to establish the favourite.

Among the great places to experience the national celebrations in Ireland’s Ancient East will be the St Patrick’s Festival Kilkenny (15 – 20 March), where both city and county will come alive with pageantry, music and craic. Look out for American marching bands, a parade of local colour, street performers, fire shows, creative workshops for all ages and the best in live Irish music, all in a small medieval city that will make you feel right at home.

A fun-filled and exciting weekend is also promised at Waterford’s St Patrick’s Day Festival from 17 – 19 March, where the theme of the parade is ‘Waterford – Ireland’s Best Place to Live’. The city will be alive with amusements, green lighting, the traditional parade and St Patrick themed walking tours in the city’s famous Viking Triangle. The three-day event is billed as ‘Waterford, Where St Patrick’s Day began’, as Waterford was the first city in Ireland to hold a St Patrick’s Day parade over a century ago.

And after two long years, the Home of St Patrick Festival in Armagh also returns. It was in Armagh, now the ecclesiastical capital of Ireland, where Patrick began his Christian mission. The festival in his honour this year, running from 10 – 19 March, promises a lively and varied showcase of the best of the city’s culture, spirituality, music, song and dance.

As the high point of the year, wherever you choose to join the St Patrick’s Day merriment in 2022, you will experience a country and a people pouring their hearts, souls and imaginations into the celebrations.